Understanding geotextiles - geotextiles and geosynthetics are major contributor to improving the world's infrastructure.
A strong interaction and spirit of cooperation has developed among suppliers of geotextile and geosynthetic products, consultants, universities and field civil engineers with regard to the use and specifications for these materials.

There is no one type of geotextile or geosynthetic that fulfills all needs; therefore, the development of specialty materials and their applications continues to grow.

UNDERSTANDING THE BASIC FUNCTIONS OF GEOTEXTILES 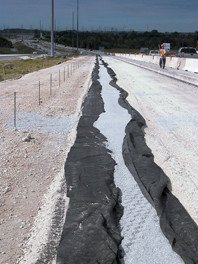 In 1926, the South Carolina Department of Highways used heavy cotton fabric on a primed earth base, followed by a hot asphalt coating topped with sand to reinforce roads. These roads exhibited reduced cracking and localized failures, while the cotton fabric remained intact. As the cotton fabric degraded, the roads gradually deteriorated.

In the early 1960s, woven monofilament fabric was used to eliminate an erosion problem along waterfront property in Florida. The success of this project resulted in the US Army Corps of Engineers using the monofilament fabric for erosion control and subsurface drainage. The US Department of Agriculture Forest Service also began to experiment with woven geotextiles to stabilize logging roads in the mid-1960s. Some early woven geotextile fabrics were made with Saran monofilament yarns, but later were made with polypropylene (PP) monofilament yarns as they became available.

Around this same time in Europe, strong interest was growing in geotextiles, in part driven by higher prices and scarcity of gravel and sand. Geotextiles allow more efficient use of these materials.

An important step in establishing geotextiles standards in the United States was the establishment in 1984 of Committee D 35 on Geosynthetics by ASTM International, West Conshohocken, Pa. The committee established subcommittees for mechanical properties, endurance properties and filtration.

ASTM defines a geosynthetic as “a planar product manufactured from polymeric material used with solid rock, earth or other geotechnical engineering-related material as an integral part of a man-made project structure or system.”

The members of Committee D-35 on Geosynthetics have played a key role in the development and acceptance of geosynthetics by civil engineers and the construction industry throughout the world.

Geosynthetics comprise a wide range of products. GRI defines these products as follows:

POLYMERS AND FABRICS USED IN GEOTEXTILES

The two most used polymers in geotextile products are polypropylene (PP) and polyester (PET):

Most woven geotextile fabrics are made from slit film PP yarns, monofilament or continuous multifilament yarns. A major application for slit film PP fabric is for silt fences to control sediment runoff from construction. Most slit film yarns are pigmented black to maximize their sunlight resistance. Woven monofilament fabrics are often used in erosion control applications.

Nonwoven fabrics for geotextile use can be made from either staple fibers or from continuous filaments in the form of spunbonded fabrics that are subsequently needle punched. The needle punching process enables fabrics to be made with controlled porosities.
High-porosity fabrics reduce the potential for clogging, making these fabrics useful for subsurface drainage and erosion control. Heat bonding of nonwovens provides thinner and stiffer fabrics of lower porosity. The higher strength of heat bonded fabrics makes them useful for road stabilization applications.

In geotextiles, PP will continue to amount to more than 50 percent of the polymer used. The use of PET, particularly in woven fabrics, will grow in areas where its higher modulus and lower creep properties will be an advantage.

Use of geocomposites will continue to increase as producers develop improved bonding and lamination techniques, and specialty product uses also increase.

The separation of polymer producers from the geotextile and geosynthetic industry will produce more of an engineering approach to their use rather than a commodity marketing mentality.